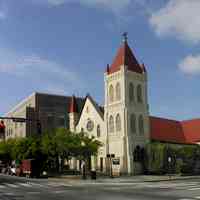 The Catholic Church has a long history in Pensacola. The first service was celebrated at the founding of the Spanish colony on August 15, 1559 with Tristan de Luna, accompanied by five Dominican friars and one lay brother. Fray Pedro de Feria, O.P. was superior. Settlement abandoned 1561. After Spain captured West Florida in the Battle of Pensacola in 1781, the church was reestablished. Father Cyril de Barcelona, a Capuchin missionary, was chaplain to the troops and blessed an old two story wooden warehouse for a church, officially establishing St. Michael Church in Pensacola. The old warehouse church was located on the beach near the present day intersection of Jefferson and Zarogossa. Father Pedro de ValÃ©z was named the first pastor of St. Michael and chaplain to the troops. June 6, 1886 the present church at 19 North Palafox was dedicated by Bishop Jeremiah O'Sullivan. St. Michael's is the oldest church in Pensacola.
Text copyright St Michaels Church, Pensacola, FL from Timeline since 1550 - the Catholic Congregation in Pensacola.