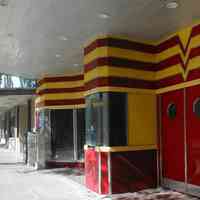 Rex Theatre opened November 1937. The building was originally the Rhodes Futch Collins furniture store. The theatre was open until the mid-1970's. Architects J.P. and Michelle MacNeil bought the theater in 1997, renovated the facade. Part of it was converted to an apartment. It was sold again in 2004 but has not reopened. The building is the most extravagant example of the art deco style in downtown Pensacola. The design was most common for commercial buildings and skyscrapers, and occasional institutional buildings. Art Deco and Art Moderne strove for a modern and artistic expression to complement the machine age. An emphasis on the future rather than the past was the style's principal characteristic.
Text copyright Thomas Paradis from Architectural Styles of America.