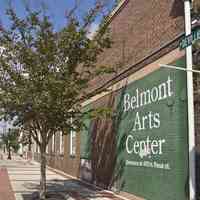 The Belmont-DeVilliers district, sometimes known as West Hill or "the Blocks," or pronounced Belmont-Devillers) is a historic neighborhood in Pensacola centered around Belmont and de Villiers Streets.Belmont-DeVilliers is historically a center of Pensacola's African-American community, due largely to Florida's "Jim Crow" laws which took effect in 1905 and mandated segregation. It was a bustling commercial district in the early twentieth century, until a number of factors led to an exodus of both businesses and residents in the 1950s.