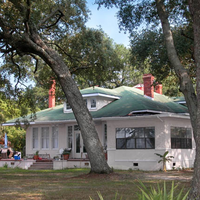 Sanders Beach is a waterfront neighborhood in southwestern Pensacola. It is named for Frank Dent Sanders, a former Pensacola fireman, police chief, commissioner and mayor. The home is one of the largest in the neighborhood and has a commanding view of the bay. It is an example of a prairie style that emphasizes the horizontal. With wings spread out to the side and low hip roofs with overhangs, the structure seems to hug the ground. Prairie homes are considered contemporary. The style was midwestern but spread across America through plan books and magazines such as the Ladies Home Journal. It was popular from about 1900 through the 1920's.
Text copyright Maurie Van Buren from Home Styles at a Glance.
View on Google Books