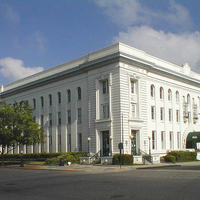 The Cultural Center is located at 400 Jefferson Street.The Cultural Center is located at 400 Jefferson St. It was constructed in 1912 as the county jail and county judical center. In 1978, when the city-county-state agreed to begin work on a concentration of services within a governmental district, the first structure erected was a Judicial Center into which the functions of the Court of Record were folded.ï¿½ From that year the building remained empty until 1988 when it was deeded by the county to the Pensacola Little Theatre with the understanding that funding would be obtained for transforming the structure into arts units, the final portion of which would become a 474 seat, state-of-the-art theater occupying the former jail - it would become the Pensacola Cultural Center, home of the Pensacola Little Theatre.