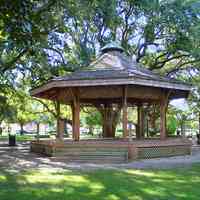 Seville Square in Pensacola, Florida is the center of the old settlement of Pensacola by the Spanish after several unsuccessful attempts beginning in 1559. This was the earliest known attempt at settlement on the North American continent. Seville Square and its twin, Plaza Ferdinand VII, were the parade grounds for the Fort of Pensacola established during British rule. In the 1960s a young group of local preservationists decided to work to restore the older parts of Pensacola. They formed the Pensacola Heritage Foundation, joined the National Trust, created the Seville Square Historic District, registered the district on the National Register of Historic Places, bought and restored with their own labor the historic Clara Barkley Dorr House on the square and convinced the city to restore Seville Square.The Seville Historic District is a place where settlers built homes along the bay. The settlers were Spanish, French and British. Pensacola was a seaport town - fishing, shipping, and naval stores were the backbone of community. The homes in the district date from the early and late 19th Century. These homes are some of the oldest in Florida. Established in 1752 by a group of Spanish hurricane survivors from Santa Rosa Island. The British took West Florida after the French and Indian War of 1763. British surveyors mapped the existing streets. In 1781 the Spanish captured Pensacola and changed the street names to Spanish. These names remain the same today. Seville Square is full of live oak trees. These trees give shade to visitors for picnics in the park. The trees are identified by their broad spreading crown, evergreen leaves and long acorns. At any time of day it is not unusual to find school children or adults relaxing and playing in the square. [Click here for historical resource info](http://www.historicpensacola.org/)