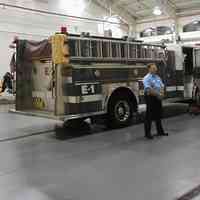 The Fire Department traces its beginnings to 1810. The city imported two fire engines, fifty leather buckets, hoses, and nozzles from a firm in England. Despite the new equipment, firefighting was a haphazard proposition until the first volunteer firefighting company was formed in 1821, at last providing regular staffing for the cityâ€™s firefighting equipment. For the remainder of the century, the story of firefighting in Pensacola was mainly one of volunteer companies organizing, combining, and disbanding. On January 1, 1898, the city established a full-time paid fire department consisting of eighteen officers and firefighters.
This article is licensed under the GNU Free Documentation License. It uses material from Pensacola Fire Department.