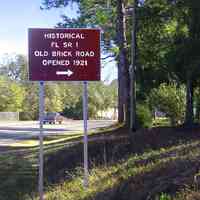 Milton, FL
The brick road known as old Spanish Trail, or State Road 1, was built from Milton eastward toward the county line in 1919-1921. Originally only 6 miles long and 9 feet wide, concrete shoulders were added in 1926 to make it a two-lane road. Renamed U.S. Highway 90 in 1929, it was converted to local use when a new highway paralleled the existing span in 1955. It is one of the few existing brick roads with sections still in use today.